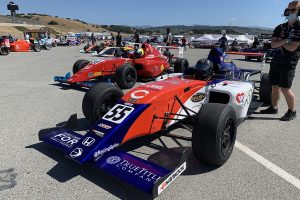 Looking for some wheel-to-wheel competition prior to the start of the F4 United States Championship Powered by Honda season, Texas based Kiwi Motorsport travelled west to take on WeatherTech Raceway Laguna Seca. Competing in rounds three and four of the Formula Pro USA Championship Presented by Exclusive Racing, team drivers grabbed a pair of race wins and a total of three podiums over the three-day event weekend.

Competing under local, state and facility guidelines due to the COVID-19 pandemic, the new normal was put into effect with masks to be worn at all times, social distancing practices taking place as well as other rules to limit interaction and the potential spread of the virus. Getting used to the new normal was the toughest part of the weekend. 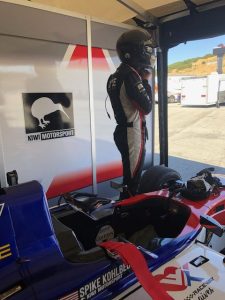 Dominating the weekend, Spike Kohlbecker secured a pair of race wins as he topped the podium blocks on both Saturday and Sunday. Scoring maximum points by taking the race wins and scoring the fast lap in both wheel-to-wheel events, Kohlbecker flexed his muscles and showed his true speed in California. Fellow Kiwi Motorsport driver Ronan Murphy made it a Kiwi Motorsport 1 – 2 finish on Sunday securing the second step of the podium and joining Kohlbecker during the end of the weekend podium celebration.

“Nothing replaces the feeling of being in a race especially when the race happens to be at Laguna Seca,” explained Kohlbecker. “While I’m still getting the feel for the F4 car, this weekend went a long way in helping prepare for round one in Mid-Ohio in a few weeks. Now the focus shifts to getting physically and mentally ready for the start of our 2020 national campaign.”

“I was happy with the result at the end of the race, considering this is the first time in the car in a long time,” added Murphy. “We have three days testing planned before the first race which will help me a lot. It’s was amazing to drive and compete on such a legendary track such as Laguna Seca. I look forward to my first race at the Mid-Ohio Sports Car Course in the F4 United States Championship Powered by Honda series at the end of the month.” 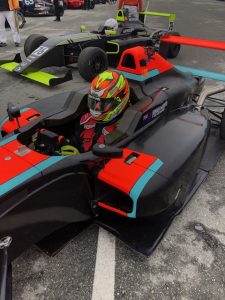 After a one-year hiatus from racing, veteran F4 competitor Vincent Khristov made his return to the seat this past weekend. Showing top-five pace throughout the weekend, Khristov was forced to retire due to a steering issue but all in all had a great return to racing.

“It was a good weekend out West but now we make the long trek back to Mid-Ohio where we tested a few weeks ago,” added Team Principal Teena Larsen. “A few more days of testing, a lot of prep and thousands of more miles crossing the United States are on the schedule, but we are excited to finally be back racing and to be able to see our extended motorsports family.”