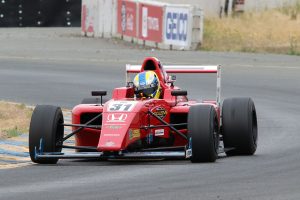 It was all Spencer Bucknum in rounds five and six of the Formula Pro USA Presented by Exclusive Racing event this past weekend at Sonoma Raceway. Racing with the Black Sheep Racing outfit, Bucknum dominated the weekend and took control of the championship point standings as the series reaches the halfway point. The championship battle is beginning to take shape with only six races remaining.

Gaining three positions and the Hard Charger award for round five, Bucknum also secured fast lap honors as he topped the podium on Saturday afternoon. Cooper Becklin finished eleven seconds in arrears of Bucknum to score a second-place podium result while Will Ferguson ended his first wheel-to-wheel action of the weekend in third. 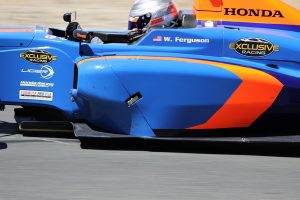 Sunday saw the same three drivers in the same three positions on the podium but much closer on track action kept each and every competitor on their toes. Bucknum took the win by a scant .826 over Becklin while Ferguson crossed the stripe in third. Cooper Becklin took fastest lap in the race with Will Ferguson garnering the Hard Charger points.

“We want to say a big thank you to the staff at Sonoma Raceway for allowing us to hold this event and to be the first race at the facility with the new COVID-19 restrictions,” explained Exclusive Racing’s SK Morgan. “We were the test subjects, and I think everything went off without a hitch. As a Promoter, we are extremely excited about what we were able to put together in just a week and a half. We could not have pulled this off without the help of our partner series The Formula Car Challenge and the Crossflow Cup. We’d like to thank Andrew Wait from Crossflow Cup and a very big thank you to our partner in crime, Telo Stewart and World Speed Inc. Without their help, the event would not have been such a great success. We look forward to the potential of more events like this in the future.” 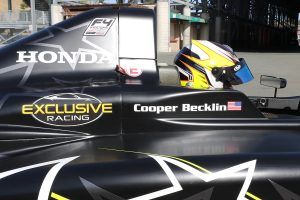 “Being at the track feels like home with everything that is going on in the world,” added Morgan. “We had a great weekend trackside, and it is always good to see the smiles on our customers’ faces. We get a little bit of a break now after a few solid weeks of running, but we will be anxiously awaiting rounds seven and eight in less than a months’ time. Again, I want to express my sincere gratitude to World Speed, all of our partnering race series, as well as the teams, competitors, volunteers and officials that made the weekend such a success.”

Following the weekend, Spencer Bucknum has worked his way to the top of the charts in the F4 class and is your current championship point leader as Jay Horak continues to hold the top position in the FR division. The next on track action for the Formula Pro USA Championship Presented by Exclusive Racing is July 31st  – August 2nd at the WeatherTech Raceway Laguna Seca.