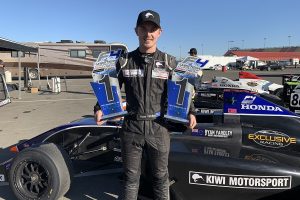 The 2021 Formula Pro USA Championship Presented by ExclusiveAuctions.com Winter Series took the green flag this past weekend at the Auto Club Speedway and one name was at the top of the charts in every official sessions. Racing out of the Texas based Kiwi Motorsport camp, Ryan Yardley claimed two pole positions, two race wins and scored the fastest lap in one of the two races to score nearly maximum points in the opening weekend of the Winter Series.

“It is only November but the first round of our 2021 Winter Series is now behind is,” explained SK Morgan. “With the next two events two and a half months away, it is a good break for our teams and competitors to regroup for another season of competition. While the first race weekend is in the books, new drivers and teams to the series can still contest for the series title with one drop weekend available by counting the back-to-back February rounds for their championship total.” 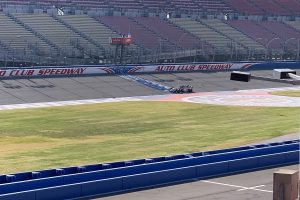 The Kiwi Motorsport trio of drivers was dominant all weekend sweeping the podium and awards during both days of Formula Pro USA F4 competition. On Saturday, Yardley claimed the pole position, race win and fast lap award as teammates Joseph Daniele and Bailey Paterson pushed him to the end finishing second and third respectively. On Sunday, it was once again Yardley who started from the pole position en route to his second win of the weekend, while Paterson and Daniele swapped the second and third positions with Paterson getting the best of his Kiwi Motorsport teammate. Paterson also scored the two bonus points for the fastest lap of the race, snatching a perfect points weekend from Yardley in the final on track sessions of the event. On the FR side of the Formula Pro USA Winter Series program, Alex Kirby earned a pair of race wins and topped the podium on two occasions throughout the weekend. 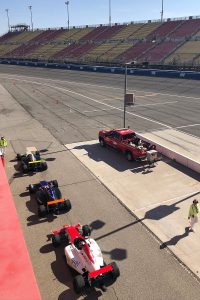 While two events remain on the Winter Series calendar, they will both take place in February during back-to-back weekends. With the F4 United States Championship and the FR Americas Championship both coming to the West Coast in 2021, the Formula Pro USA Championship Presented by ExclusiveAuctions.com is the perfect opportunity for teams and competitors to get some extra track time in the Western half of the country.

Morgan added, “I have spoken to several East Coast teams who are planning to come out and help us close out our Winter Series, especially the final weekend at the Sonoma Raceway as the Northern California location will be the opening round of the national series in April. Registration for both of our remaining rounds will open shortly.” 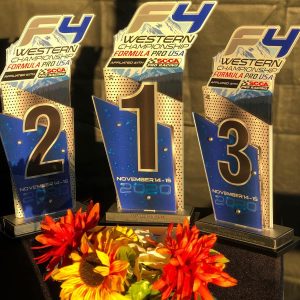 Stay tuned for a future announcement regarding the 2021 Formula Pro USA Presented by ExclusiveAuctions.com Summer Series schedule that will feature such tracks as Thunderhill Raceway Park, Sonoma Raceway, WeatherTech Raceway Laguna Seca, Portland International Raceway and the Circuit of the Americas.

Continuing to expand the Formula Pro USA and ExclusiveAuctions.com footprint via social media, series officials invite you to send all team and driver media releases and series related news to Media@ExclusiveRacing.com Please keep text and photos separate, and we will try and ensure posting to our websites and social media pages.