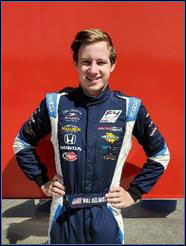 Although the famed raceway is technically De La Rosa’s ‘home’ track as he lives just minutes away in Pebble Beach, it was his first time racing there: “This is such an amazing track and being able to race the F4 car at Laguna was really cool for me, being my home track,” said De La Rosa.  “The Corkscrew and the elevation changes lived up to be everything I expected.  I’d say the most unique part of the track is turn 9, we were able to take that flat or nearly flat…it is a really fast left hander.”

De La Rosa qualified fourth on Saturday morning, this result determined the starting position for race one on Saturday and race two on Sunday.  As the green flag fell late Saturday afternoon, De La Rosa had a fantastic start, passing two cars for second position before the first turn.  While Will was charging hard for the race lead, two Pro-Mazda cars in a separate class made contact and spun off in turn six, sending sand on the racetrack.  Will lost control of his #13 F4 car when he hit the dirty racetrack from the incident and spun into the tire barrier, ending his day. 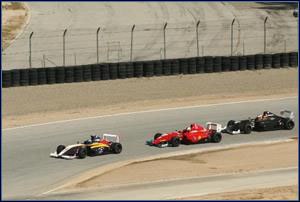 The final race of the US Masters weekend took place late Sunday afternoon.  Will had another phenomenal start jumping from fourth to second at the green flag, “I was able to get a good jump on my competitors at the green flag and moved to the inside to hold the position.  There is no way to go around the outside at race speed into turn two, so I was able to hold it.”  While Will pushed hard to chase the leader there was a tight battle behind him. Will held second position for 12 of the 13-lap race, but by the final lap there was a three-car challenge for second place. On the final lap, while defending his position, Will and another competitor made slight contact in turn five, sending both cars to the gravel trap, fortunately, Will was able to get back on track and take the checkered flag in fourth position. “I am so happy we were able to get back to racing and really want to thank everyone at the SCCA, Exclusive Racing and WeatherTech Raceway Laguna Seca for making it happen.  I did not get the results I was hoping for, but I learned a ton this weekend on and off the racetrack.  I can’t wait for our next round at Sonoma in just a few weeks, and I am happy to go there leading the championship.”

Driving for Margraf Racing in the #13 Del Monte Aviation/Ligier, Will De La Rosa is in his first full season of competition.  The F4 championship consists of 12 events at world-class racetracks on the west coast, and each event is a double-header, featuring two 30-minute races. Turning his focus now to rounds 4 & 5, Will takes the championship points lead to Sonoma Raceway June 26th – 28th.